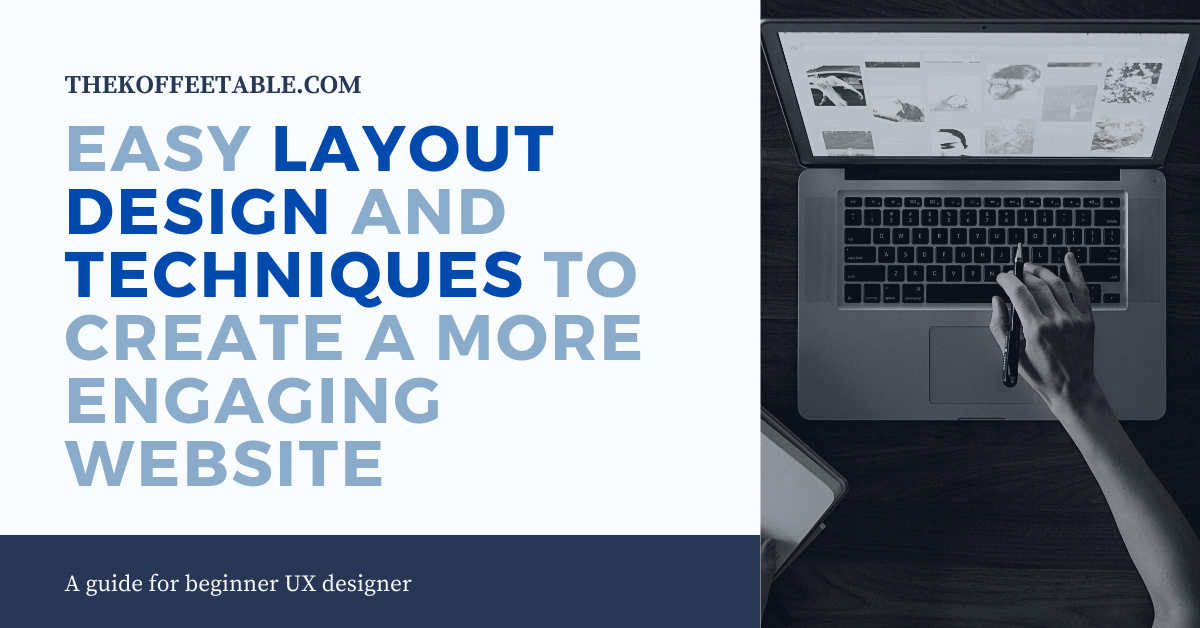 Layout design can be a little tricky for someone who has no experience in the field. It requires a keen eye for detail and using various tools to create content. With new layout design techniques, website layouts are evolving to be more engaging.

Users are now able to navigate through a website more easily and intuitively with eye-catching layouts. Did you know that layout design is a critical part of a website? With the help of grid layouts, responsive designs, and other layout design techniques, it’s easier for your users to find what they want using a better interface.

With these modern layout techniques, designers can create value-adding websites that provide effective user experiences. In this article, we will explore some of the most popular layout design styles and techniques for website design.

Though there are many tricks and tips available to help layout designers, the following steps will help you understand how layout design works and how you can use it in your own projects.

What is Layout Design?

Layout design is all about giving your website a certain look that’s unique to your business or website. There are many different ways to do this – color schemes, fonts, design patterns, and more – but the end result could be anything from minimalist to flashy. Layout Design is the process of determining the elements and layout of a website.

Layout Design has been around for as long as Web Design, but it’s now evolving to become its own unique field. With more options available to design layouts now than ever before, there are many different styles and techniques that can be applied depending on what you’re designing and who you’re designing for.

Why is Layout Design Important?

The purpose of design is to present content in an attractive and easy-to-understand way.

Layout design is the art of arranging text, images, or both on a page for aesthetic and practical purposes. Layout designers must take into account the purpose of the document, its audience, the available space, and the desired style.

Layout design helps to establish a strong connection with your audience because it creates a clear sense of what to expect from a website. It helps the visitors understand what they can find on a website within seconds without having to read anything else about it. You should make sure that your layout design is easy to use and easily understood by visitors.

The goal is to present content in an attractive and easy-to-understand way. Designers often speak about three different types of layouts:

A layout design is a framework that holds the structure and visual aspects of a design. It is an expression of your brand’s personality, positioning strategy, and target audience.

It is important for a website to have a layout that is intuitive and engaging. It should be easy to understand and follow from one page to the next. There are many different layout design types.

The layout design is the visual representation of your website design content. It can define whether your content goes from being engaging to being dull and boring. It also consists of how your pages are arranged on the screen with its hierarchy, typography, color palettes, and imagery. To create a more engaging website, it is imperative that you understand the four different layout types and how they work together.

The Four Types of Layout Design:

The 8 Design Principles of Layout and Composition

Graphic design is the process of visually arranging type, images, and design elements on a surface in a way that clarifies communication.

Design principles are the rules of thumb to guide the designers before starting their work. It helps them to avoid common mistakes and ensures that they are working with these principles in mind.

The 8 Principles of Design are not new concepts but help guide our paths through design decisions.

Instead, there are many principles that designers should keep in mind while designing a piece or even a website. These include:

A common arrangement for this white space is called negative margins which means that type has been pushed to one side or cropped from view by surrounding content. Negative margins can often be used as a tool within the digital design to create depth and emphasize important information without overwhelming readers with text or graphics.

Balance is the relationship between parts and wholes within a work to create focus, unity, harmony, proportion, and form. It helps create clarity by drawing the viewer’s attention to the most important aspects of any design.

Contrast is the principle of opposing or contrasting two or more elements to create a visual, aesthetic, intellectual, emotional, and/or psychological effect. It is used in design (i.e. color schemes), photography (i.e. black & white), film editing, and written works such as essays and short stories.

Unity is the relationship between different elements within a work which creates an overall feeling or impression about the whole rather than just one element at a time. It helps provide cohesiveness and allows for easy comprehension while also providing an opportunity for repeated thoughts and ideas to be expressed throughout the work.

Continuity is a principle of design that states that once one part of the design is completed, it should be connected to other parts. It also states that the elements in a design must be connected and make sense together. The Elements flow together, which creates interesting effects.

There are a few principles in UX design that must always be followed to create a unified and coherent design. One of them is called alignment, which means that there should be a connection between all of the elements in the design. It is the equation that dictates how we align objects in composition and it gives shape and form to our visual world.

The principle of hierarchy is the most fundamental meaning of the term. It refers to an arrangement by which some objects are ranked above others. Elements are arranged in levels or tiers, which creates visual interest and helps reduce visual clutter. The arrangement also defines the relative importance, degree of power, or seniority of each object.

A design principle that focuses on balance and harmony between two halves of a symbol or image. The elements must have equal importance and weight on both sides of the image or symbol.

Most creatives want to use their blog to share their work with the world, but they also want to make sure that their content is easily digestible and looks great.

Something you should take into account when building your website or blog is that the visuals are always the most important part of it. If you don’t have beautiful visuals, your visitors will not stay on your site for very long. The best way to create beautiful designs is through good typography and color palettes.

E-commerce sites and blogs are figuring out the best way to design their websites to satisfy their audience and gain more conversions and sales.

You can use the following 8 layout design tips for a website or blog in order to boost sales and gain more visitors.

Layout design is one of the most important factors for any website. The layout should be highly-responsive and give users a seamless experience while navigating through it.

With the rise of the web, there has been a surge in the need for web developers. It is not easy to get started with any kind of website development without having some sort of foundation. This means that even if you are new to this field, it is important to understand how layouts work before jumping into your own projects.

The importance of understanding the basics of layouts was shown when many beginners in this field made their websites look bad because they tried to learn by trial and error instead of learning in a systematic way.

Layouts are at the core of what makes a website work properly. Without an understanding of layouts, it is difficult to be productive in any aspect of development.